Virtus Segafredo Bologna is the 2021-22 7DAYS EuroCup champion! Virtus became the first Italian team to ever win the competition by downing Frutti Extra Bursaspor 80-67 in front of a wild sellout crowd at Virtus Segafredo Arena on Wednesday. Virtus lifted its sixth continental trophy and earned the right to play in the 2022-23 Turkish Airlines EuroLeague.

Euroleague Basketball (EB) is a global leader in the sports and entertainment business, devoted to running the top European competitions of professional basketball clubs under a unique and innovative organizational model. Owned and administered by some of the most successful and historic clubs in the world, EB manages the continent’s two premier men’s basketball competitions, the Turkish Airlines EuroLeague and the 7DAYS EuroCup, as well as the sport’s premier under-18 showcase, the EB Adidas Next Generation Tournament.

The EB competitions bring the elite of European basketball to all five continents and to the entire sports community through the OTT platform EuroLeague TV. EB also organizes a series of community and educational activities, led by the One Team program, in alignment with the United Nations Agenda 2030 Sustainable Development Goals. On the academic side, the EB Sports Business MBA trains future professionals in sports management.

About One Team
One Team, Euroleague Basketball's corporate social responsibility (CSR) program , supported by Turkish Airlines as the One Team Founding Patron and with the collaboration of Special Olympics as Proud Partner, uses basketball to achieve real social impact in our communities. With an innovative model of interconnectedness across an entire continent, Euroleague Basketball and its clubs have developed a complete CSR program that brings together activities from each team in an integrated, impactful way, working under the theme of "community integration" that actively addresses targets of the United Nations Sustainable Development Goal 10 on Reduced Inequalities. Each participating club develops a specific One Team project tailored to its own community needs to benefit groups in danger of exclusion due to problems such as substance abuse and gender, physical or intellectual disability. Since its founding in 2012, the One Team program has reached already directly and indirectly more than 23,000 participants through its various team projects.

Congrats Bologna! And huge respect to Bursa , with this small budget and reaching the final? Wow , man only milos contract is bigger than whole Bursa squad , Bursa what a heart and character!

Come on Virtus, we are finally back where it belongs. Congratulations also to Bursa. good team. However, the formula of this Cup is really horrendous. Divide the teams into four preliminary rounds and introduce playoffs with rounds at an average of three games.

Burs a big RESPECT, From Lithuania!

@Street Workaed i think yes because zalgiris in this season is so bad, but i think zalgiris will win or Lietkabelis

Does Vilnius Rytas have a chance to become a champion in the Lithuanian basketball league? if you leave an unbiased comment

Why have we never seen virtus bologna in euroleague in recent years, teodocic, hackett, shengelia, belinelli who played in nba for many yrs, and that coach was coach of spain i believe for many yrs. Bursaspor deserve the credits, with such a small budget they came to the final.

LET'S GOOOOOOOOOOOO!!! IT FINALLY HAPPENED!!! SO PROUD FOR MILOS AND THE ENTIRE TEAM!!! NOW TIME TO WIN IT ON THE BIG STAGE!!! FORZA VIRTUS!!!

I dont know how high Bursaspor stands on the powerrankings in Türkiye but its definitely not top 3 and still managed to be in the final of EuroCup! Outstanding achievement, nothing to be sad on to lose the final. We are proud of you Bursaspor!

Bursa fought like LIONS. I will never forget this season. WARRIORS.

What a team! All stars.

Congratulations from Greece great Bologna, glad to have you back next year in euroleague. Very happy for milos and hackett former olympiakos players

Virtus Bologna is the new champion of eurocup This team with Milos Teodosic , Marko Belineli , Daniel Hackett and one - two new players will be unstoppable the next year ( 2022 - 2023 ) and one of the favourite team for euroleague final four

this might be the weirdest competition format i ve ever seen. Bursa had to play all 5 playoff and final games away. What is the point of the one and only final game being played in one team's arena and in front of its own crowd?!

Very happy to finally see Teodosic in Euroleague. And Virtus in general tbh

Finally! Italian basketball deserves to have AT LEAST 2 teams in the Euroleague.

@Arrigo Strina So? Where are you trying to get to? There is no doubt that Bologna has an incredible basketball tradition but it's not the only city to have so. Milano is the most successful national club, Caserta in the 80s and 90s was a force to be reckon with and most of their players were locals!

@Marco Rossi In terms of talent, I think we can get to that level once again. It's all about believing in our young players and giving them the time and the chance to shine. Fontecchio Mannion Polonara Banchero Tonut Della Valle are all showing their worth and we still have veterans like Melli Gallinari Datome available. Hackett would still be a great asset for the national team but unfortunately it doesn't look like he wants to come

Can't wait for this team to join Euroleague

Congrats to Bologna! But, man was it really necessary to have a home court advantage on o single match cup final and plus referee support? You already have 10x more budget and superior player rotation, all alone that would be more than enough to win the cup.

​@Ulvi Koçyiğit milano has 1 final four appearance and that was last year in Cologne so I dont know what you are trying to say.

Back where We deserve!

Virtus Bologna is made up of star players with very good careers. Bursaspor made it to the finals with incredible away wins. He would have had better chances with early foul problems and neutral ground. Both teams deserve respect. Virtus Bologna good luck for the Euruleague, I hope Bursaspor also gets a green card.

It would have been very different if it had been a double match or neutral hall. Conrat Bartemeu 👏

Euroleague We are back. GO VIRTUS !!!!

Congrat bologna. Thanks bursa for this good match

What a shitty format with the single games! This would've been a fantastic series, just like with Partizan and Cedevita! But either way, contracts to Bologna! This team belongs to the EL!!

Congratulations to Bologna. The referees were a disgrace to basketball. The MVP should have more character, fair play and respect for the opponent.

@Stefan Rakovic clearly recognizable, a player who doesn't ask the spectators to support their own team, but asks the fans to whistle at the opponent, that seems to be Serbian respect! :-)

@Gokhan Demir haha, teodosic is a basketball magician, something you turkish players, coaches, clubs and NT will never ever have(despite number of 84 million nation), no matter how much money you invest in basketball. Simple as that. You cant buy talent, you are born with it. Basketball in Europe is Serbian game ..😉

The finals would have to take place , in away stage for both of the teams. It is about a title and one of the teams takes strong advantage .

If playoffs format wasn't idiotic as it is this year, Bursa wouldn't even be in finals.. But congrats anyways

With that kind of roster virtus can be next year in FINAL FOUR. Mark my words.....

Hahaha! Even Zalgiris will be able to grind and eat them.

I believe virtus can be to final 8!

Bologna mabye with ten time mote budget in his team compare with Bursa. Respect to Bursa

Bologna team favorite coz they are for euroleague. Bursaspor new team respect them

Congratulations to bologna, euroleague needs teams with good players and great history! And the atmosphere is great!

I agree, Panathinaikos should be dropped to Eurocup. Euroleague needs good players and teams!

This format is unfair how can you play a final in one of the teams home stadium?

Refs were terrible. Bologna didn’t need your help to win the game. Only Teodosic’s contract is already bigger than whole Bursaspor team.

Thanks God this circus is over. Virtus belongs to euroleague, and good bye to tuti fruti teams...

How come bursa played every single game in playoffs as guest???

In the middle of the season, get it euroleague stars from cska due to ban, then talk about virtus is the champion. Ridicuoulus

bologna could have won fair and square,they were better than bursa tonight but man this refeeres trully sucked leave euroleague anne panther just not belong to even this level they didnt let needham play ffs

you don't know what to do? pass to teodosic, he will find a solution...

To the person reading this, even though I don't know you, I wish you all the best of what life has to offer you ❤. Stay healthy and stay blessed everyone 🙏

where the final took place?

Bologna will be minced in EL with this type of play and coaching style next year.

Bologna is a historic team and deserves to be in the Euroleague! It is worthwhile for Olympiakos to get the cup! GATE 7!!!!!!!

What is the problem bro?

What a collection of garbage is this Bologna team. Their win was not impressive. Their total worth is 20 times more than Bursaspor but yet they could still be beaten. The did not look invincible with so many players of high caliber. Euroleague is so stupid allowing late transfers for the rich clubs just before the playoffs. Considering that Bursa was in the 3rd division 3 years ago, their run was so impressive. Had they had one or two more players with some talent on the bench, they could surely pull a win from Bologna. 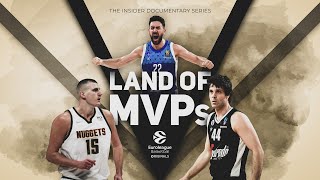 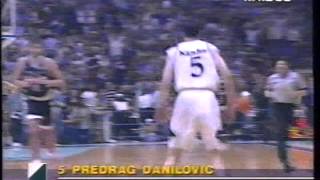 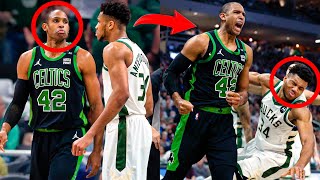 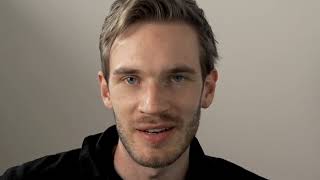 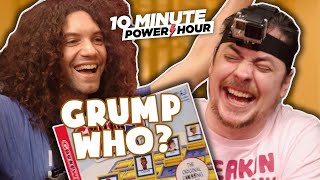 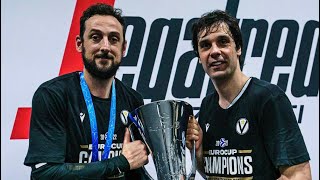 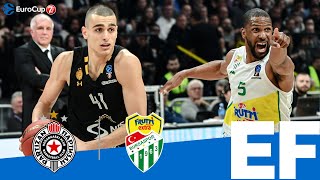 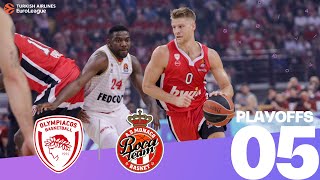 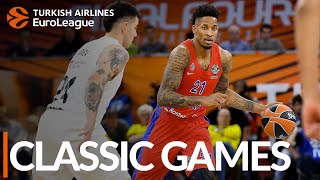 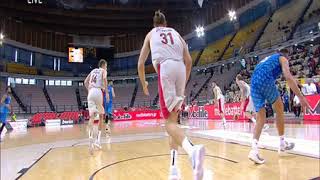 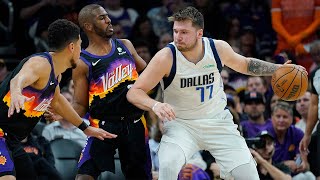 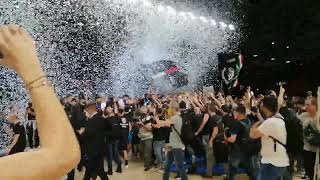 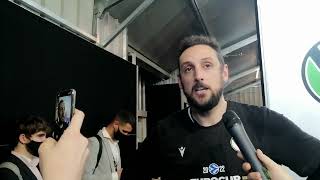